The Manchester Buddhist Convention took place on Sat 12th of October at St. Peter’s Chaplaincy as the year before.

As before, it was wonderful to have been able to hold it here and our thanks go to the Rev. Terry Biddington and his team. It is a great, central location, large and comfortable.

Many thanks need to be made but I want to begin with some thoughts about the Convention itself.  Some of it is from feedback. Some from conversations.

Two people mentioned, ‘chaotic moments’. One person said there was some of chaos but it was soon resolved – ‘… a bit like life’.

With 25+presenters and 200+ attendees in a space to which we gain full access only at 9pm the night before, will always entail some degree of ‘chaos’. I’m more interested is in how we deal with the chaos rather than the chaos itself so I hope you will accept this. Each year some things get better and other things crop up.

One person mentioned the length of inputs and how they fitted together but more felt that they were complementary and responded to the theme in a remarkable way.  Several commented on how moving they had found them.

The acoustics were a problem. I am trying to understand the reason for this as the Auditorium has an in-built microphone system. I can only suppose that it is more suited to lecturing than to discussion. Anyway we will examine this problem and will review how we use this space next year.

Feedback on the Science session was uniformly good (apart from comments about acoustics!) – well presented and engaging.  Critique came from panel members themselves some of whom felt that tighter facilitation would have encouraged discussion. We may follow up on the Science strand next year, perhaps focussing on a specific theme from this year’s session. It’s clearly of great current interest and the impact of meditation on the neural pathways is a popular area of research, while  mindfulness ‘training’ is finding it’s way into all area of work including the NHS and schools.  One question posed was whether Science represented an alternative to faith or had become or another ‘faith system’.  (The Jury’s out on that one.)

The Gender and Buddhism session observed that Buddhism, ‘changes every time it enters a new culture, and feminism is something that Buddhism is absorbing now, with various degrees of success.’  Gender ‘politics’ has never been invisible or uncontroversial in Buddhism from the time when Mahaprajapati’ implored the Buddha to permit women into the sangha.  Women have also been teachers. A wonderful example is the hunch- backed slave Khujjuttara whose teachings are the Itivuttaka (‘This was said by the Noble One’) and is said to pre-date the Pali canon. A life well-worth examining. (It would also be useful to reflect on the difference and convergence of the two notions – gender and feminism.)

Now change and challenge is happening both East and West and have as much to do with a new millennium as a new culture. Some instances of women’s activism are – Buddhist nuns in China/Tibet (eg – Nun Ngawang Sandrol who has spent over 15 years in jail in severe conditions.)  Bhiksuni Chen Yen, founder of Tzu Chi (So it was really very good to welcome Tzu Chi back to the Convention this year. Bhiksuni Chao hwei Shih, who lobbied the Dalai Lama to recognise full ordination for women, tore up the 8 Gurudharmas, established a research institute for applied ethics, animal rights, environment and conservation in Taiwan.  Joanna Macy, long term socialist and activist, Bell Hooks activist on class, race and gender issues within Buddhism, Joan Halifax who founded Upaya and the International Women’s Partnership (established in Thailand and includes all spiritual paths not just Buddhist) to name a few. It would be interesting to explore this in some depth at a future Convention or to have it as a MBC sponsored workshop.

Here is a nice final comment  ‘…you cannot be too mindful: it is best to be mindful at all times, it is also preferable to be Feminist at all times – whatever it means for each individual.

Several people commented on Buddhism and social action sessions. One person observed that it challenged ‘the stereotypical image of sitting and meditating’ – a stereotype that never fails to surprise me. It flies in the face of the Buddha’s own example – a life of action and service as well as practice – having left family, wealth and home to serve a wider community that included those he had left. An example to learn from is the way he cared for a sick monk who had been abandoned by his comrades and chided them for doing so. He taught by demonstration – tending the sick; challenged the status quo in relation to both caste and gender, again by example rather than overt confrontation, though he didn’t recoil from challenge if it became necessary. Could it be that one reason why this stereotype exists is because meditation is sometimes approached as a technique without a spiritual underpinning? Something that just makes us feel better?  Buddhism (like other spiritual paths with meditative practices) becomes decontextualised, without a framework.  Nor is it embedded in the cultural fabric. Yet Buddhists are reluctant to engage with other schools which could facilitate the development of a framework, make us visible and anchor us more deeply in this society.  I think we also short-change ourselves over the amount of work Buddhist centres do.  Many (most?) are quietly active both here and overseas.  I know that Tibetan lineages (with which I am most familiar) have schools, feeding centres, hospitals, etc in Europe, Asia and Africa.  It would be interesting if someone in the different Centres did a quick survey on what their centres were involved in and we could begin to develop a compendium of practical Buddhist contributions.

The day was underpinned by meditation, practices and specific Dharma/Dhamma topics from the different schools represented in Manchester – a range of Zen, Chan, Theravada and Tibetan practices, presented by deeply committed people helped create a vivid tapestry of a spiritual paths that has ways and means to suit the needs of most searchers and could have very simple and applicable answers to the issues that face us in the world today.  Unlike early Buddhist societies, we have access to all the different schools – some austere, some reflective, others quite wild! The MBC brings all these together.  What began as a get-together of Buddhists in Manchester is fast becoming an annual event that attracts Buddhists from a much further afield, as well as people of different faith backgrounds. This is the main strength and service it offers the Dhamma/Dharma.  Feedback indicates that this is also what people appreciate most. Would it not be wonderful if Buddhists could develop an ongoing discourse that is not just an annual event? We have a few ideas we may approach people/centres with in the future.

Thanks must go to the presenters – the ideas you brought, time put in, comments, discussions and promises of future help; to those who stepped in at the last moment. Thanks to Tzu Chi who made a very generous donation to the MBC- all the funds they raised from the sale of books on the day! All this is an example of Buddhism in action and all for the joy of sheer giving!  Final and great thanks must go to the wonderful steering group.  (Jeeta raho as they say in India – continue to live!)

This report comes out just as we re-group to organise the 2014 event when we can follow up on some of the ideas. MBC 2014 will take place, as usual on the second Saturday of October 11th at St. Peter’s Chaplaincy.  Details will follow but please put that date in you diaries.

Metta and maître to all.

Manchester Buddhist Convention 2013 would like to say a huge thank you to all involved in making this year’s event so successful and enjoyable – that includes the University Chaplaincy for providing the space, visiting Venerables , monastics and speakers from many traditions, the Steering Group, including the cooks and kitchen helpers, and all groups and individuals who attended.

It was lovely to see you all there – thank you for coming and we look forward to seeing you next year. 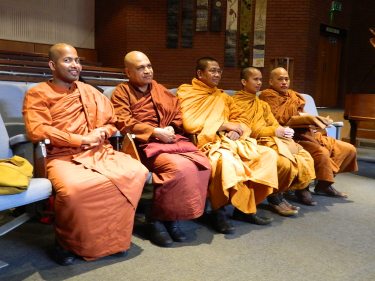 Photo : Thai, Burmese and Sri Lankan Theravadan monastics , from three different monasteries in Greater Manchester, in the opening session at the MBC 2013.

An emerging ‘interBuddhist’ tradition , unique to Manchester and reaching out to the whole North West, and aiming to:

bring together the Buddhist community in the North West and foster dialogue and understanding between followers of different Buddhist traditions.

Preparing the venue and running the day is a joint endeavour – please let us know if you would like to be involved.

The 2013 Convention was on  Saturday 12th October

This may be the last update we send unless there are urgent things to communicate, therefore please make a note of the following:

If you require refreshments between these times please bring your own. There are also cafés around St. Peter’s.

Looking forward to seeing you again,

Stick with one strand, or cherrypick.  We will also have keynotes, a discussion session and a space to just be. As always, the success of the day will depend on how you participate in it!

There is no set charge but Dana will be welcome and needed to cover the basic cost of venue, food and other expenses. Register for mbc 2013

On the day, programmes will be posted on walls on the Chaplaincy.